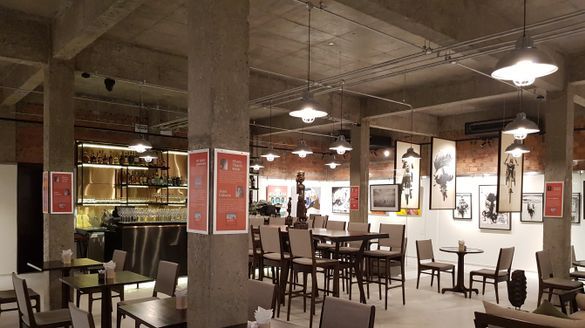 Art and food come alive on the Rue des Arts next month with the opening of art space at Anantara Hoi An on Tuesday 2 October 2018.

art space is an art and dining concept venue, where innovative food creations and original artwork combine to offer new experiences for foodies and art lovers alike. The indoor space is home to the art on display along with a gastro-style menu, while the outdoor terrace, named pizza at art space, is poised to become Hoi An’s top destination for quality, wood-fired oven pizza.

A creative collaboration between Anantara Hoi An Resort, March Gallery and the Precious Heritage Museum, art space features original artwork in a variety of media created by both local artists and international artists who call Vietnam their home.

art space showcases a rotating collection of artworks curated by acclaimed UK artist Bridget March of the March Gallery who also conducts watercolour classes for Anantara guests as part of the resort’s artist-in-residence programme. In the coming months movie nights, craft sessions, “art and wine” painting classes and other initiatives will be added to the line-up of art space events, which already include weekly Creative Writing classes hosted by Jennie Beaumont, who also works with the March Gallery, encouraging the inner author in everyone.

“The support for the Rue des Arts project by Anantara Hoi An is already making a big difference to the local arts scene. I am so excited about the enthusiasm with which they have embraced the new movement. We have an exciting programme of events to breathe life and colour into art space and bring new experiences and activities to visitors and residents alike,” said Bridget March.

art space also displays select works by a Hoi An-based photographer Réhahn, whose Precious Heritage Collection Museum on Rue des Arts boasts Vietnam’s largest private collection of traditional ethnic minorities’ costumes, as well as portrait and landscape photography. Commenting on the collaboration, Réhahn said: “I believe that just as being exposed to culture elevates the soul, the new art space at Anantara Hoi An elevates the value of Rue des Arts and also of Hoi An as a destination. I am proud to be displayed alongside such great artists.”

Bridget March is an English artist, living and working in Hoi An. She is also the founder of March Gallery and is well known for her watercolours, drawings and acrylic works. She also produces etchings and illustrated books about her six-year discovery of Vietnam.

Réhahn is a French photographer who has been working in Hoi An since 2011. He is known for his portraits and is described as the photographer “who captures the soul of his models”. He is also the founder of The Precious Heritage Art Gallery Museum and Couleurs D’aise in Hoi An.

Marjon has lived and worked in Vietnam for over 15 years. She is one of those rare, natural artists. Her drawings speak of love and loss and were developed during a very difficult time in her life. In Asia, the red threads represent a connection to a soul mate and between the past to the future.

Minh is a long-established artist in Hoi An. His work is edgy, occasionally political and always angry. Sometimes he caresses his canvasses with paint and sometimes he throws it at the canvas in fury. Minh always uses colour in exciting combinations and dramatic monotones.

Tuan studied at Hue College of Art.  He is a colourist who paints in a Fauvist style. He uses bold colours in his stunning landscape and animal studies and is heavily inspired by rural scenes of Vietnam.

Nathan is a fine artist from Canada who has been living and working in Vietnam since 2011. He takes a very experimental approach to his work and has developed a unique ‘printing’ method which he calls ‘back transfer’. Nathan does not sign his work because he says his technique is so distinctive, that a collector only needs this signature of style.

Jack is an English artist working in Saigon. He uses the traditional Vietnamese art of woodcut to create images about street life. Integrating images of everyday life and social philosophies, Jack celebrates the history and cultures of daily life in Vietnam.

Jean is from southern France and has been an artist in Hoi An for over 15 years. He doesn’t say much about his work because he wants the viewer to discover what might be in the image for themselves. He works in ink on paper and communes with his subconscious before beginning.

Graeme is drawn to street life and to capturing people in action. He calls this ‘candid street photography’. Working mainly in black and white, his skill is in capturing the emotion of moments and communicating it to you to evoke the same emotions that he also experienced at the time of his inspiration.

Wood carvings are created by many ethnic groups in Vietnam.  The carvings celebrate the lives of ancestors. As Vietnam is changing, its young tribespeople are now expressing their emotions, politics and philosophies through art and the wood carvers are becoming sculptors with something new to say. The H’re artists live in South Central Vietnam, not far from Hoi An.