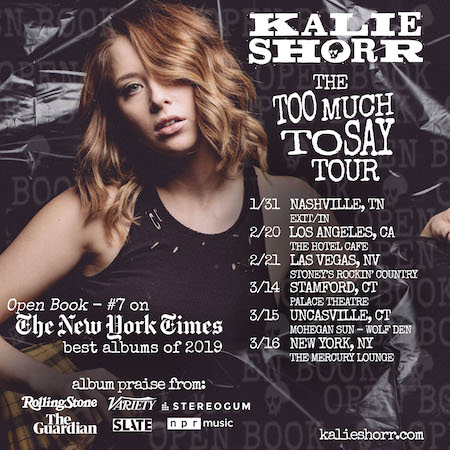 The Guardian Includes Kalie Shorr in “50 New Artists For 2020”

NASHVILLE, Tenn. (January 14, 2020) — Variety announced earlier today the “Too Much to Say Tour,” Kalie Shorr’s first headlining tour. After being named to countless 2019 album of the year lists, including The New York Times, Variety and NPR, and performing for over a hundred thousand at Nashville’s New Year’s Eve celebration, Shorr plans to bring Open Book to fans across the country. The tour kicks off on January 31 at the iconic Exit/In in Nashville. The tour includes stops in Las Vegas, New York and Los Angeles, among others. Get tickets and information for the shows here.

“I’ve been looking forward to my first headlining tour for a very long time. I’m so thankful that hard work is paying off and I’m getting to bring Open Book to some really great venues across the country. Kicking things off at Exit/In is special for me,” said Shorr, adding, “I’ve seen so many of my favorite bands there over the years and starting the ‘Too Much To Say Tour’ in Nashville feels so right. Naturally, I’ll be playing all of Open Book, but I’m also excited to reimagine some of my earlier work through a new lens. I can’t wait to get on the road, drink some tequila, and sing my heart out with the fans.

Earlier this month, British daily paper The Guardian announced their “50 New Artists For 2020.” Out of those 50 international artists, Shorr is named fourth on the list and the only artist included from Nashville.

They write, “Astonishingly, she addresses her past with mordant wit and vast reserves of empathy – plus gigantic hooks worthy of Nashville-era Taylor Swift, pop-punk icons Paramore and Jagged Little Pill-era Alanis.”

“Kalie Shorr had the year’s most acclaimed album from a freshman country artist,” Variety’s Chris Willman.

To be kept up to date with Kalie Shorr, go to kalieshorr.com.

About Kalie Shorr
According to The New York Times, Kalie Shorr’s debut album – Open Book – was the #7 Best Album of 2019 alongside Taylor Swift, Lana Del Ray and Ariana Grande. Along with a long list of other accolades, Variety called Open Book “2019’s best freshman country effort,” and Stereogum said “country music needs this kind of fire.” Shorr burst onto the Nashville music scene in 2016 with her self-penned hit “Fight Like A Girl” and shortly after, the Portland, Maine singer-songwriter became a Sirius XM “Highway Find” and was spotlighted by Apple Music, Spotify, CMT, Radio Disney Country, Pandora, Taste of Country, The Boot and even Billboard magazine. She was named a “CMT Next Women of Country”, “The New Nashville” by Teen Vogue and a “Top 10 Country Artist To Watch In 2018” by the Huffington Post. She made her Grand Ole Opry debut in 2018 and has gone on to play that heralded stage 17 times so far. Shorr has toured with Sara Evans, RaeLynn, Jimmie Allen and spent the past December supporting LeAnn Rimes’ “You And Me And Christmas” Tour. From her work with the all-female, singer-songwriter collective Song Suffragettes, Shorr has been featured on PBS NewsHour, NPR’s “Morning Edition” and “On Point” as well as in ELLE Magazine. She rang in 2020 performing for over 200,000 people at Nashville’s largest-ever New Year’s Eve show with Keith Urban, Stevie Nicks,  Jason Isbell, The Struts and more. With wide praise for her current album Open Book coming from diverse outlets like NPR, Slate, People, No Depression, Rolling Stone and more, Shorr’s new year is already lighting up with The Guardian (UK) and The Tennessean calling her an artist to watch in 202